Yesterday was World Food Day, and this interesting report on food waste by the UN Food and Agriculture Organization concludes that “[r]oughly one-third of the edible parts of food produced for human consumption, gets lost or wasted globally, which is about 1.3 billion ton per year.” I believe simple things can help reduce our waste of food, like trying to make full use of the foods we eat.

On Monday I decided to do just that. I took the leftover turkey carcass from our Sunday night Thanksgiving dinner and with a few ingredients from around the kitchen I made turkey stock. It’s a simple process and you can rely on basic ingredients from your fridge and pantry. I used these ingredients:

You can use any vegetables and the best recipe, when it comes to stock, is no recipe. The longer you cook the stock, the healthier and more flavourful it becomes.

Making stock is very basic. I placed the turkey, vegetables and spices in a large stock pot, and filled it with water covering the turkey. I brought the pot to a boil then simmered on low for 16 hours (I would’ve done more but was too tired).

I then removed the pot from the stove, and let it cool before pouring it into mason jars. Since I had a large amount, I used mainly 1 litre mason jars (although having different sizes is useful for various recipes).

I then filled one jar with 3½ cups of stock (leaving enough room to freeze) then used that jar as a measurement for the remaining jars, by placing an empty jar beside it and filling that jar with stock to reach the same volume as the first jar. This saved a lot of time since I had several jars to fill.

I usually freeze my jars for up to three months. I was able to make just over 8 litres of turkey stock: 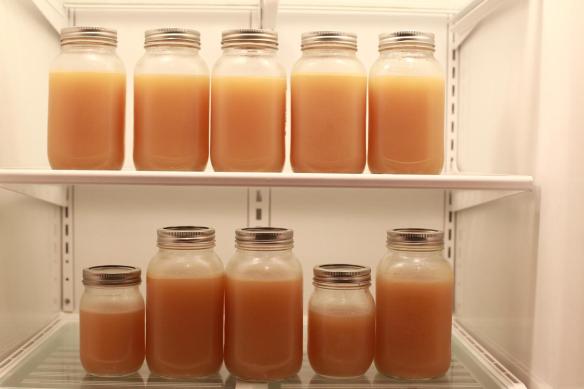 Tonight I succeeded in making a chicken dish that would last two dinners, two lunches as well as over 20 litres of chicken stock, all from a 5lb chicken that cost me about $22.00.

When I started making chicken stock a few years ago, I had no idea what I had been missing out on. I had relied on chicken bouillon cubes which, when I read the labels, were loaded with sodium (even the “organic” ones). So I switched to the liquids in the tetra packs but they didn’t do much for me. I then decided I would make my own stock, and I haven’t looked back since.

I make a big batch of chicken stock a few times a year which I then freeze. While it can be laborious at first (and especially without proper equipment like a good quality stock pot, ladles, adequately sized sieves), the absolute and divine pleasure of homemade stock is second to none. It adds a rich, creamy taste to all my soups. I often substitute chicken stock when making quinoa for salads or other side dishes. The results are pure genius.

When I cut up a chicken this morning for my dinner meal, I kept the carcass to make stock. I was able to fill six mason jars with 3.5 cups each of stock: 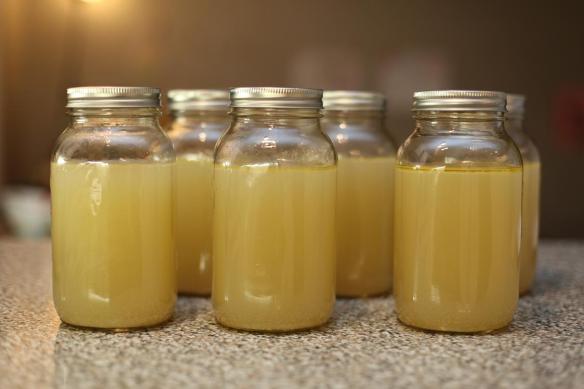 The recipe for my chicken stock is here. I’ve also included my favourite sweet potato soup recipe that I love making in the dead cold months of winter.

When the stock is cooked, cooled and jarred, I reserve some of the remaining chicken pieces and the next day we have chicken soup for lunch, as well as the day after that.

Imagine the possibilities when we think creatively about how we cook food? I used to throw out the carcass since I had no further use for it, until I realized that I could get more bang for my buck if I actually used the WHOLE chicken. A penny saved really is a penny earned!